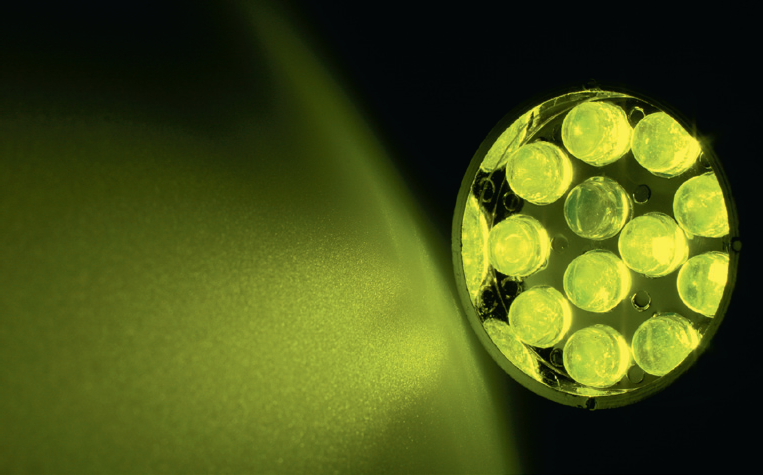 NECESSITY IS THE MOTHER OF INVENTION

It’s been over four years since the first wave of import restrictions on incandescent lighting came into effect in Australia, along with the introduction of minimum energy performance standards (MEPS) requirements, aimed at eliminating lower efficiency light sources from the market.

Not so long ago, the idea of a suitable light source to replace incandescent lamps was virtually unfathomable. A long-time favourite of lighting designers the world over, incandescents delivered a flattering aesthetic in most applications, despite their established
shortcomings. The death knell sounded when the Australian Government, via the Ministerial Council on Energy, began a staged phase-out program, based on the availability of effective and efficient alternatives.
As of April last year, 50 W 12 V MR16 reflector halogen lamps ceased to be a local lighting option. The Lighting Council of Australia estimates that there are around 300 million downlights on our shores and most of them would have historically relied on that particular light source. If that number is correct, it means that every Australian has over 13 downlights in their immediate environment. That isn’t hard to believe if you glance up in any new or recently renovated home, where it’s not uncommon to see four such fittings installed in a single 3.5 m2 bedroom. They aren’t confined to residential applications only, however — downlights are extensively used in hospitality, retail and architectural lighting environments.

The ban probably came as a surprise to the millions of Australians who mistakenly regarded ‘low voltage’ as energy efficient, but not to lighting professionals. By their very nature, incandescent lamps burn hot. In warmer climates, such as ours, they create an unnecessary requirement for additional cooling and therefore a further energy burden. Add in the 10 to 15 watts of energy required by the transformer for each fitting and you’ve got a
fairly inefficient lighting solution on your hands. No one in the business was going to argue that they were an efficient choice, but the question remained: what could be used in place of this lighting workhorse?

These lamps had a lot going for them from a design point of view as they were available in different beam angles, a range of colour temperatures and they could be dimmed, all factors that give designers flexibility.

On the downside, they have a relatively low efficacy (light output to power consumption ratio measured in lumens per watt), are susceptible to filament shock, have been known to explode on failure as well as discharge ultraviolet light (hence the dualpurpose glass covers), have a relatively low lamp life and create excessive heat. The transformers used with low-voltage downlights were also inclined to buzz, which is fine if they are installed
in a moderately noisy environment, but not so appealing in a residence or recording studio.

During the lead-up to the phase-out, recommended replacement alternatives included:

Each choice has influencing considerations or limitations. Option one seems like a quick fix because it is a straight swap; degradation exhibited by filament lamps when exposed to regular on–off switching, which makes them ideal in scenarios where this usage is typical, including motion-detected bathrooms or low-traffic, back-of-house hospitality areas.

In contrast to CFLs, LED lamps start at full brightness, with no warm-up required. This apparent deficiency in CFLs was the subject of much public backlash when it came to phasing out GLS lamps in 2009; and not just in Australia. International media featured hundreds of stories of GLS panic buying as the ban moved across the globe. CFLs are undeniably slower to start up but it’s claimed full brightness is achieved in 20–30 seconds, which should be acceptable for general room lighting, if not as part of a security or fire system. That said, CFLs just don’t appeal aesthetically so are unlikely to be used widely in applications outside of utility or service areas, where ambience is less of a consideration.

The trouble with LEDs, as with so many other facets of life, is that not all are created equal. LEDs were originally developed as signalling electronic components, not for general lighting use. Recent developments in LED lighting are a case of making the technology suit the requirement, which creates disruptive conditions and can result in less than ideal outcomes.

According to the Lighting Council of Australia, “Solid state lighting is a complex technology. LEDs are far more technically challenging than the traditional incandescent and fluorescent technologies. Getting everything right in the manufacturing process — from the LED chip to the driver to the heat sink to the light fitting itself — is critical to the performance of the LED.”

The market has seen such massive growth in the last decade, but rapid advancement can also mean ‘little or no real-world testing’, so it’s important to ensure that the product suits the need. In the case of retrofitting into an established lighting system, there are other factors to consider, including existing transformers and lighting controls. Many manufacturers claim their LED lamps are dimmable, yet they can be prone to unwanted
flicker when controlled and can also dramatically change colour over their lifespan and even suffer premature failure. As in any retrofit scenario, there’s an element of risk in hoping it all fits together seamlessly, and you’ll need to do your research to ensure the best outcome.

Which brings us to the ‘replace old for new’ option and there’s no denying that purpose built comes with less risk, less angst and, ultimately, less work. The Alphalux range of LED downlights is available in two series; the 11 W high-performance series, suitable for typical ceiling heights, and the 14 W high-performance series, where higher ceilings are encountered. Alphalux LEDs offer a direct replacement for 50 W halogen lamps and provide 72% energy saving when compared with the same. Available in a number of configurations, Alphalux LED downlights are fully MEPS compliant and meet with required Australian standards. They meet RoHS standards and are free from lead, mercury, radioactive isotopes and other heavy metals.

An 80° wide beam angle provides a uniform light distribution, suitable for general task lighting, as well as display and feature applications. The fittings are dimmable with approved dimmers.

Payback times vary according to the setting, but analysis of typical daily usage times by application suggests:

While the demise of incandescent lamps was heralded as a catastrophe by many in the lighting industry just a few short years ago, it seems that the opposite is true. Necessity being the mother of invention, new technologies and solutions abound.

When we hear the word ‘warehouse’ we often picture a gigantic hall, full of machines whirring and forklift trucks zipping around. However, in reality, a warehouse usually comprises of a multitude of different sections – manufacturing spaces, loading bays, racking […]

When St John of God Health Care teamed up with SLS to implement a total lighting solution in its hospitals and healthcare centres, no one imagined they would save so much energy by replacing conventional incandescent, halogen and fluorescent lamps […]

NO LONGER IN THE DARK

The Shell Geelong Refinery in Victoria is one of Australia’s largest and most complex hydrocarbon refineries. The Geelong site is part of Shell’s downstream business and refines a variety of crude oils and feedstocks into a range of fuels and […]