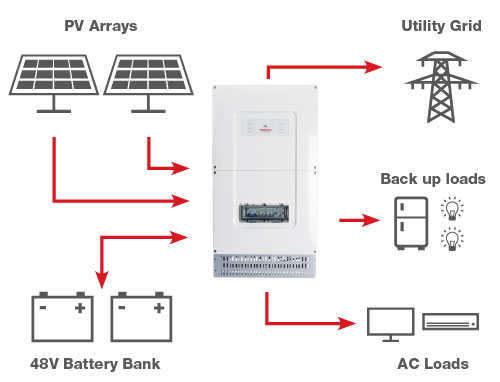 There’s no denying that the addition of solar power to a household is a great step for homeowners to avoid the increasing rise of energy bills. However, the average Australian uses the majority of their electricity outside of daylight hours, so they’re still required to buy electricity from the grid during these peak periods.

The simple solution to this is to add a battery to a solar PV system, allowing excess energy that is generated through the day to be stored for use during expensive peak periods at night or placing it on reserve for emergencies.

Battery storage is by no means a new development, but it’s certainly a growing trend for Australian consumers. A report recently published by the Climate Council predicts that half of all Australian households will soon have solar with battery storage, with the market potentially growing to $24 billion.

What’s more, the increase in popularity is causing the price of battery solutions to plummet – the Climate Council says that battery costs have already fallen by an average of 14% every year between 2007 and 2014. These numbers are set to increase even more with many companies ramping up their production.

Furthermore, as worthwhile feed-in tariff plans dwindle away and electricity prices remain particularly high during peak hours, a solar PV system with storage is fast becoming the most economical way to provide a home’s electricity.

What are the advantages of solar battery technology?

It’s no secret that Australia has high retail electricity prices, however, the country is also one of the most affordable places to buy a solar PV system. With the addition of a battery storage system, a household can almost double its self-consumption – adding a 4kWh battery to a 5kWh system can increase the amount of self-generated electricity from 30% to 60%.

Also, in a nationwide sense, the uptake of battery storage technology could potentially lower the cost of electricity bills by affecting wholesale energy and network costs. Currently, when retailers need to meet peak demand, they look to expensive gas “peaking plants”. Battery storage can provide them with a cost-effective way of meeting this requirement.

What makes a good storage system?

These days, storage systems usually come in two forms: an all-in-one, plug and play device from a single manufacturer, or a modular design that allows an engineer to incorporate components from different manufacturers. Plug and play systems are simple to design and install, but their modular counterparts are usually more flexible.

Seeing this, Enphase Energy recently launched an AC battery that hopes to tick both of these boxes. It allows homeowners to size a storage system to suit individual needs and budget, without sacrificing plug and play capability. Additionally, Enphase’s software rectifies some of the issues inherent with high solar PV penetration rates, including power quality stabilisation and protection against over-voltage in local networks.

Another company making waves in the Australian market is Redback Technology. Its Smart Hybrid System allows homeowners to store generated energy for when it is most needed. The company is even looking to allow system owners to trade their spare electricity with their neighbours. Further, Redback’s system is compatible with battery company Redflow’s new ZCell battery. This system is a 10kWh flow battery that can ‘timeshift’ solar power from day to night, store off-peak for peak demand periods and support off-grid systems.

For a limited time, Solar + Solutions is giving away 1 free Enphase Envoy-S with the purchase of 2 x AC Batteries We’ve made it easy for you to help your customers be smart about energy storage! This great offer is […]

Solar + Solutions Online is your one stop online shop for all your Renewable Energy needs. You can browse through our extensive product listing from panels, inverters and battery storage through to Full System Kits and place your order online […]